Will I Experience Withdrawal From Synthetic Marjuana Addiction?

Synthetic marijuana, also known as synthetic cannabinoids, are artificial versions of the mind-altering chemicals found in the marijuana plant. Synthetic cannabinoids have components that act in similar ways to delta-9-tetrahydrocannabinol (THC), which is the main active ingredient in marijuana. It is THC that gives the relaxing feelings that many users seek.

Synthetic marijuana goes by many names when sold, with the most popular ones being Spice and K2. They are sold in small, colorful packets, and they tend to be widely available. Users can buy them in gas stations, novelty shops, and online merchants.

Though they are technically illegal, different versions of synthetic marijuana continue to be sold in legitimate shops because of how they’re made. Manufacturers often tweak the chemical structures of the active ingredients to evade regulations. Also, they label their products as “not fit for human consumption,” despite users ingesting or smoking them.

These drugs mimic the natural effects of THC, but in stronger ways. Thus, these drugs are highly addictive. In turn, they can also lead to a number of withdrawal symptoms. They also have no known medical uses, which, along with their addictive properties, qualify them as illegal drugs.

What happens when I get addicted to synthetic marijuana?

When you become addicted to these drugs, you might find that you can’t stop thinking about them. You always have an urge to take them, even if you have more important things to do. Eventually, the cravings become so strong that you would just drop everything to find a dose of synthetic marijuana.

Addiction to these drugs affects your life in a variety of ways. Other people would mostly notice changes in your behavior and lifestyle. For example, your boss may notice that you often show up late for work, but before, you were always early. Also, you may find yourself missing deadlines often, which did not happen in the past. A possible cause of this is spending more and more of your time taking synthetic marijuana.

Your family and friends may also suspect something is wrong when you decline their invitations often. Before, you enjoyed hanging out with the most important people in your life, but now, the addiction has forced you to make more time for drugs instead.

Eventually, you may face the threat of being fired from your workplace. Also, your relationships with friends and family may turn sour. Some of them may express concern and urge you to get help. Until you do so, your addiction will get worse over time.

Part of the addiction to synthetic marijuana is experiencing so-called withdrawal symptoms. This often happens when you try to quit all of a sudden.

What are the symptoms of synthetic marijuana withdrawal?

When you become addicted to this drug, you would often feel the constant urge to take more of it. The addiction can get to the point that even if you want to stop, you find it nearly impossible to. That’s because of the nasty withdrawal symptoms that you experience when you try to quit.

Here are the symptoms of withdrawal that you might get:

You may experience many of these symptoms at once. When it gets too uncomfortable, or even painful, your compulsion to take the drug would be even stronger and harder to control. This is why most users who attempt to quit on their own are not successful.

If you continue to take synthetic marijuana, the next danger you will face is overdose.

What happens when I accidentally overdose on synthetic marijuana?

Since synthetic marijuana has components that are many times stronger than natural weed, it does not take a lot to overdose on it. Once you do, you will experience the following symptoms:

At this point, you need medical attention right away. Call 911 or have someone make the call for you. The earlier you get to the emergency room, the better your chances of making it.

Without immediate medical attention, these symptoms can escalate into possibly lethal conditions, such as:

Are there ways to avoid synthetic marijuana withdrawal symptoms? 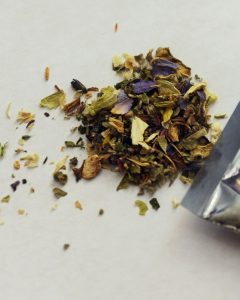 Unfortunately, once you get addicted to synthetic marijuana, withdrawal symptoms are inevitable. Once you try to stop taking the drugs, you will likely experience at least one of the symptoms listed above.

However, if you seek professional help, it will be easier to manage these withdrawal symptoms and begin your recovery process. In a formal rehab setting, your journey away from addiction may be medically supervised. Doctors and nurses will help you manage symptoms of withdrawal while gradually reducing your dosage of synthetic marijuana. Later on, you would be able to live normally without taking even a small amount of the drugs.

Afterwards, you will go through different kinds of behavioral therapies to help you live a drug-free lifestyle. One of them is cognitive behavioral therapy, which is an effective technique backed by lots of research. In this therapy, you will be trained to develop new skills to cope with any event that triggers your cravings for the drugs. In turn, you can actively avoid the drugs by yourself later on. The skills you learn from cognitive behavioral therapy are also effective in preventing relapse in the long term.

Counseling is another effective behavioral therapy. Here, you will work with a counselor to help motivate you to stay on the road to recovery. Whenever you have drug cravings, or if withdrawal symptoms become too difficult for you, your counselor will help you pull through. The counselor may also work with your family, educating them on how best to help you with the recovery process. You may also be encouraged to enroll in a support group.

When facing synthetic marijuana addiction, you don’t have to fight your battles alone. Seek professional help and you will get your life back on track soon.