Side Effects of Drinking Too Much Whiskey

Whiskey is a common distilled alcoholic beverage, and it is classified as hard liquor. In other words, the alcohol in whiskey is more concentrated than in other drinks like wine. Drinking it in moderate amounts will not cause problems, but if you’re not careful, the high alcohol content may have negative effects on your body.

What are the side effects of drinking too much whiskey, and are there ways to avoid them? Read on and find out.

Most bottles of whiskey you can find in stores are marked “80 proof.” This proof number is twice the amount of alcohol present in the beverage. So for whiskey that’s 80 proof, it contains 40% alcohol. That’s already high, yet some brands of whiskey go even further, having as much as 60% alcohol (120 proof).

With this much alcohol, even small amounts of the beverage can make you drunk. This depends on your tolerance for alcohol, though, and different people have different levels of tolerance.

How will I know my level of alcohol tolerance? 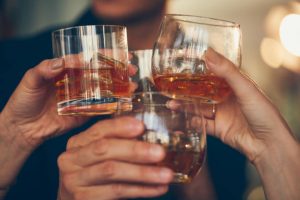 If it’s your first time drinking, there is no way of knowing beforehand how many shots of whiskey it will take before you get drunk. You will have to learn from experience. But do not let yourself pass out before you stop.

Instead, count the number of shots of whiskey you took before feeling anything strange – dizziness, everything around you spinning, or a slight headache. More often than not, those feelings indicate you have reached your limit.

So if you’ve taken 4 shots of whiskey so far, and you feel weird by that time, do not drink more. Four shots is your limit.

If you have been drinking regularly for a long time, then you would better know your limit. However, this may increase over time as your body becomes used to the effects of alcohol.

The more whiskey you drink, the more side effects will show up in your body. Here are a few of them.

What are the side effects of excess whiskey? 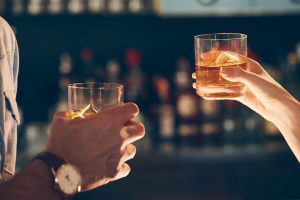 If you lose track of how much whiskey you have taken, there are a number of harmful side effects. First of all, alcohol affects your higher order thinking skills. It impairs your better judgment and sound decision-making. It makes you more prone to accidents, injuries, and aggressive or violent behavior.

Drunk driving is another fatal consequence of drinking too much whiskey. In the United States alone, drunk driving accidents have claimed the lives of around 10,000 people every year from 2010 to 2019. Even if you’re not severely intoxicated yet, alcohol can still affect your vision, reaction time, and alertness, which makes driving a lot more dangerous.

Over time, excessive consumption of whiskey will also lead to liver diseases like cirrhosis. If you have this condition, your liver would harden, preventing the flow of blood through it. In turn, your liver can no longer detoxify your blood, and if not addressed, cirrhosis can be fatal.

Another fatal side effect of drinking excess whiskey is alcohol poisoning. Because whiskey has much more alcohol than other drinks, it is easier to get poisoned. When this happens, you would experience a fast heartbeat, difficulty breathing, or worse, a coma. This can lead to death if medical attention is not called for immediately.

If you drink lots of whiskey frequently and don’t have any fatal side effects yet, you may be prone to developing alcohol addiction. In professional circles, this is known as alcohol use disorder. It’s classified as a disorder because you would lose control over your drinking habits. The urge to drink whiskey would become so strong that it would be almost impossible for you to resist.

If you’re taking medications, drinking whiskey is not a good idea. Alcohol is known to interfere with lots of medicines, making them less effective or creating other harmful side effects. If you are on the following medications, it’s best to avoid whiskey or any alcoholic drink:

Pregnant women must also avoid drinking whiskey, as alcohol can cause deformities in the developing fetus. Consuming alcohol while pregnant will later lead to birth defects, mental retardation, or even premature death of the fetus while in the womb.

How do I avoid the bad side effects of drinking whiskey? 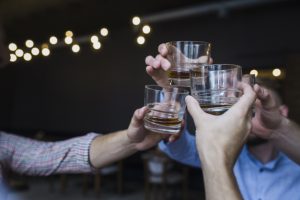 The first rule is to drink moderately. Drinking every day is not advisable; once a week is fine, but it’s best to limit your alcohol intake to a few times per month. Also, do not drink too much in one session. Up to five shots of whiskey (1.5 fluid ounces per shot) should be fine, but it depends on your limit.

Speaking of which, it’s also essential to never go beyond your limit. If, say, you can drink 5 shots of whiskey before feeling tipsy, then do not drink a sixth shot. Better yet, limit yourself to 4 shots to avoid distorting your senses.

Another way to keep drunkenness at bay is to drink water while taking whiskey. Water will dilute the alcohol that you take in, which weakens its effects. That way, you can enjoy drinking while avoiding excess alcohol accumulating in your body.

Next tip is to take small sips of whiskey at a time. This way, you only ingest a small amount of alcohol in each sip. When combined with drinking water in between sips, you’ll feel far less side effects of alcohol this way. You’ll also stay sober for longer this way.

When you drink whiskey, it’s always wise to avoid driving afterwards. Even if you drink only a little, the alcohol may still have affected your senses and alertness, making it unsafe to drive. A split second of losing focus is all it takes to get into a potentially fatal accident.

Don’t risk your life and those of other people on the road. Instead, call a sober friend or family member to drive you back home.